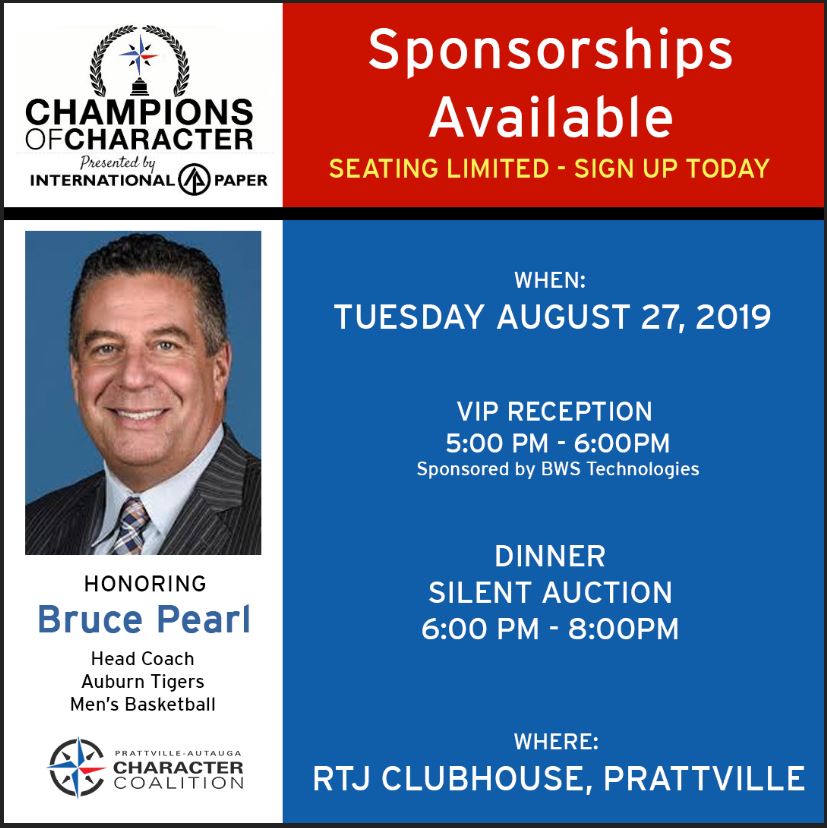 INVEST IN CHARACTER......BE A SPONSOR!
Sponsorships NOW Available For The 2019 Champions of Character, presented by International Paper !

This year we are proud to recognize and honor Coach Bruce Pearl, head coach of the Auburn Tigers men’s basketball program, as the 2019 Champion of  Character. Coach Pearl arrived on the Plains in March 2014. He led Auburn to the SEC Tournament semifinals in 2015 as a 13 seed, ended Auburn’s 18-game losing streak to Kentucky in 2016, and earned his 500th career win as a head coach in January 2017.

Despite the challenges faced in the 2017-2018 season, both internally and externally, Pearl led this team to its best record since 1999 while winning the SEC regular season championship. And, in 2018-2019 season, Pearl’s team won the SEC Conference Tournament and played in the NCAA Final Four Tournament for the first time in Auburn’s basketball history. During his tenure at Auburn, Pearl has shown his commitment and determination to build a program against tough competition, while instilling character in leadership and selflessness to inspire greatness in others.  Character traits he has shown include loyalty, resilience, diligence, endurance and enthusiasm, just to name a few.

Coach Pearl is also known for the difference he is making off the court. The Bruce Pearl Family Foundation, a non-profit organization, is dedicated to providing support to children and families facing challenging and life altering illnesses. From talks to golf tournaments to community service, AUTLive, Fore the Children, and Bruce Barkley and Basketball, are helping to make lives better. Some of the many  organizations benefitting this year include Russell Medical Foundation, Smile-A-Mile, Coosa Valley Medical Center, Children’s of Alabama, East Alabama Medical Center, Joy to Life, aTeam Ministry, Children’s Harbor, Russel Hill Cancer Foundation and the Montgomery Cancer Center.

Perhaps, Coach Pearl’s character shined the brightest on national television when he and his team showed us how to be humble with dignity and class, when they were heartbroken after losing their biggest game ever. It’s for these reasons and many more why the Prattvillle-Autauga Character Coalition, a non-profit organization committed to teaching and promoting good character among our citizens, has selected Bruce Pearl to receive the 2019 Champion of Character Award!

Our annual family fun-filled evening includes dinner, a silent auction, and this year we are including an EXCLUSIVE VIP Reception for guests who sponsor at the Presenting, VIP Reception and Gold Levels!

Prove Excellence In Character Is Important For Your Employees and Your Community, Become a Sponsor TODAY! All Sponsorship Levels include Dinner, Some Levels Offer Reserved Seating and/or Tickets to the Exclusive VIP Reception!

Click Here to Invest In Character and Become A Sponsor
Unable To Be A Sponsor, But Want To Support Our Community Of Character?
Click Here to Support the Silent Auction
Your investment this year will allow the Prattville-Autauga Character Coalition to continue to expand their reach in the community allow us to reach even more children, youth and adults in our community!

The Prattville-Autauga Character Coalition is a non-profit whose mission is to strength our communities by promoting and fostering excellence in character for each citizen.